I flung a softball bat.

A fast acting spectator saved a young fan from being whacked by a flying bat at a MLB pre-season game in Florida.
Pittsburgh Pirates outfielder Danny Ortiz lost hold of the bat and photographer Christopher Horner captured what happened next in a series of frames at the Atlanta Braves' spring training stadium.
The young boy in the firing line had been looking down at his phone when the man next to him flung out a protective arm.

Ortiz told the Pittsburgh Tribune-Review.: "I didn't know what happened, if it (hurt) the boy or anything. I went home and my wife said to me, 'You almost killed that kid!'"
Baseball bosses want clubs to extend protective netting at grounds, and have warned fans about the risks of sitting close to the field. 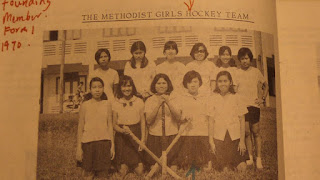 This is a Methodist Hockey team. About the same girls played softball for the school team. The girl second from the left is Jasnah Obeng, St Mark verses St John. I was batting and I flung the bat.

I was sent out, but I didn't know where or who the bat landed. It was decades later when I told Jasnah about it. Jasnah said, it was her who copped the flying bat and it was very painful.

We laugh when we meet. I will be meeting Jasnah, and will will have a good laugh.