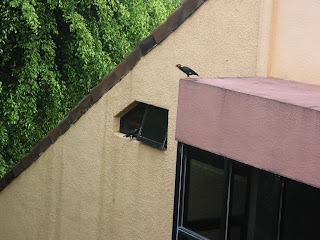 My sister is married to a Tiong. I tease my nieces and nephews they were so important that they name a CITES II bird after them.

Where I lived in Singapore, the Nanyang Technological University situates at an old primary forest. As Singapore developed, the parcel of primary forest gets smaller and smaller. We still get many wild animals like snakes, ant eater, pangolin, wild pigs, insects etc.

A pair of hill mynahs have been visiting my bedroom window and my neighbouring unit at 33A Nanyang View. One morning I woke up to the sweet calling song of this rare bird tapping at my bedroom and bathroom window. They tap on the glass windows.
Their fleshy yellow wattles make them very attractive to look at. The whistling is very loud. They sound like Tiong,

I teased her that the birds mistook my house for hers in the downtown Singapore. In Indonesia, these birds are called Burong Tiong, or the birds that make the sound Tiong.
Hill mynahs have a mainly black plumage that shimmerswith tinges of green and violet in the sunlight, a white patch on each wing, and yellow feet. They have fleshy yellow wattles across their necks, red or orange bill and yellow skin areas beneath and behindtheir eyes. Males and females are very similar in appearance.

Because they are so rare, people sell them in the black market for four hundred dollars each. I joke with D that I should open the window and catch the birds. Later, there were two more pairs.

The photograph here is taken from my bedroom. The birds were outside the stairway of the empty unit next door. One of the birds is pecking at the bathroom window.

NTU has staff from all over the world, and many are curious to see such birds on the campus. They come to my house to see this rare sight. I posted this to the NTU residents' website and generated a lot of interest.