WW2: spine and back cover 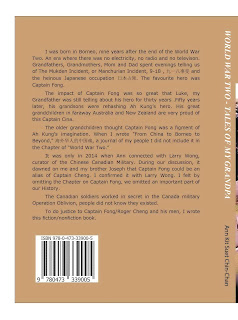 I was born in Borneo, nine years after the end of the World War Two. An era where there was no electricity, no radio and no televison. Grandfathers, Grandmothers, Mom and Dad spent evenings telling us of The Mukden Incident, or Manchurian Incident, 9-18 , 九一八事变 and the heinous Japanese occupation 日本占领. The favourite hero was Captain Fong.
The impact of Captain Fong was so great that Luke, my Grandfather was still telling about his hero for twenty years. Fifty years later, his grandsons were rehashing Ah Kung’s hero. His great grandchildren in faraway Australia and New Zealand are very proud of this Captain Cina.
The older grandchildren thought Captain Fong was a figment of Ah Kung’s imagination. When I wrote "From China to Borneo to Beyond," 海外华人的中国魂, a journal of my people I did not include it in the Chapter of “World War Two.”
It was only in 2014 when Ann connected with Larry Wong, curator of the Chinese Canadian Military. During our discussion, it dawned on me and my brother Joseph that Captain Fong could be an alias of Captain Cheng. I confirmed it with Larry Wong. I felt by omitting the Chapter on Captain Fong, we omitted an important part of our History.
The Canadian soldiers worked in secret in the Canada military Operation Oblivion, people did not know they existed.
To do justice to Captain Fong/Roger Cheng and his men, I wrote this fiction/nonfiction book.