KUCHING: Bakun Community Safety Committee (BCSC) chairman Dr Elli Luhat said yesterday the deaths reported in Bakun were caused by angry spirits in the area although State Health Department director Dr Zulkifli Jantan had confirmed on Tuesday that the fatalities were caused by melioidosis and leptospirosis.


This Rejang river is home to many river taxis. Look at the murky water. People who are not from the Rejang area are weary of going in these boats.

Married to a water and environmental engineer for more than 35 years, it is inevitable that part of his water knowledge is passed on to me.

The river traffic  has increased, and the banks get eroded. I used to swim in the river, and also drink from it. My cousin tells me, nobody does that now. They dammed the upper tributary. 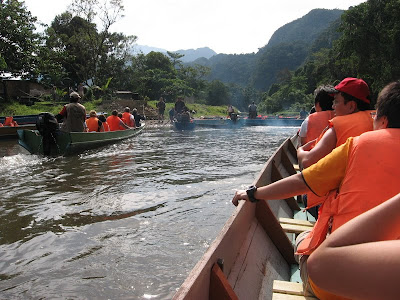 Melioidosis, a deadly bacterial disease most frequently found in Asia, is more widespread than previously believed and resists a wide range of antibiotic treatments, a just-issued study reports.
The new journal Nature Microbiology on Monday published findings that the little-known disease likely is present in 79 countries, including 34 that have never reported it. Research was conducted at the Mahidol Oxford Tropical Medicine Research Unit (MORU) here and the University of Washington in the northwestern U.S. city of Seattle, among other institutions.
The study estimates the disease kills nearly as many people as measles, which the World Health Organization cited as responsible for almost 115,000 fatalities in 2014. Melioidosis causes more deaths annually than dengue or leptospirosis, both of which are health priorities for numerous international health organizations.
It’s caused by Burkholderia pseudomallei, a highly pathogenic bacterium commonly found in soil and water. It is contracted through the skin, lungs or by drinking infected water.
Symptoms can include fever, weight loss, body aches, coughing and headaches, among other signs, according to the U.S. Centers for Disease Control and Prevention. Patients are frequently misdiagnosed as having pneumonia or suffering from sepsis, a potentially life-threatening complication of an infection.
"Doctors will try to rule out whether [patients] have malaria or dengue infection by rapid diagnostic tests," MORU’s Dr. Direk Limmathurotsakul told VOA. If neither is confirmed, "doctors will suspect that any bacterial infection is the cause of the pneumonia and sepsis" and will prescribe antibiotics, he said.
Disease resists many drugs
But this particular bacterium is resistant to a wide range of antimicrobials, including penicillin. Treatment with ineffective antimicrobials can result in fatality rates exceeding 70 percent, according to specialists.
"If they die, they die. If they survive, they survive" without the actual ailment being known, said Direk, one of the world's most prominent specialists on melioidosis.
The bacterium is especially common in Asia. The study predicts high infections rates throughout Southeast Asia, notably in Vietnam and India, where there is especially low awareness about it among medical practitioners. The tropical zones of Australia are also considered at high risk for melioidosis, as are East Asia and the Pacific, sub-Saharan Africa and South America.
Some areas in Central America, southern Africa and the Middle East are also at risk, according to researchers.
Diabetes, kidney disease raise risks
The number of cases is expected to rise amid an increase in diabetes in the tropics, especially among the poor. Those with chronic kidney disease also are considered at higher risk to contract melioidosis.
Melioidosis "can survive well within your white blood cells or macrophage. This bacteria will spread much faster and kill you easier if you have those kinds of diseases," said Direk, who is also an assistant professor on Mahidol University’s tropical medicine faculty.
People who excessively drink alcohol are at higher risk for the same reason. International travelers, too, could have higher rates of the disease; mobility increases the risk of the pathogen being introduced to new areas.
The study recommends health workers, international organizations and policy makers give melioidosis a higher priority.
Posted by Ann, Chen Jie Xue 陈洁雪 at 2:04 PM