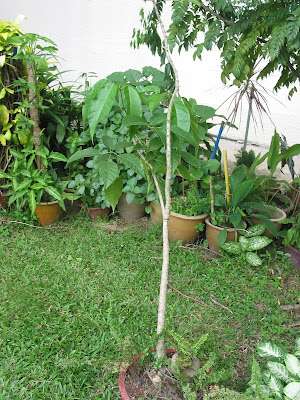 some 70,000 seeds being smuggled to Kew in 1875, by Henry Wickham, at the service of the British Empire, from Brazil and stole some rubber seeds aka Hevea brasiliensi.

From those stolen seeds, they grew to supply the rubber gardens in Malaysia and Borneo.
The original rubber trees were very good, but took too long to reach a productive age. Then the good old scientist developed a smaller tree but produced more and called it high yielding tree.

My plant is a miniature tree. It's a tribute to both sets of my ancestry. It was rubber that brought them to Borneo.In 1907, my Great Grand father was scouted to lead a developing company to grow this important cash crop.

During the World War Two, trading ceased. People stitched up rubber sheets and wore them. The more enterprising ones even made shoes.