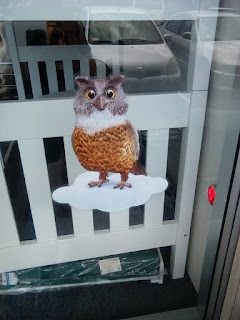 In J.K. Rowling's wonderful universe, owls bridge the magical and muggle world, carrying messages, packages, and even Nimbus 2000s with ease as they make it clear to muggles that when a message needs to get through, it WILL get through. One Snowy Owl named Hedwig also provides warm companionship when a lonely wizard named Harry needs it. http://www.lauraerickson.com/bird/Species/Owls/HarryPotter/HarryPotter.html

It is not always the case in other societies. Owls were harbingers of death.

In 1959, my dad returned from London, and we moved to Kanowit. One evening, when Grandma aka Bodai came to visit. An owl came to the house. We egged Dad to catch the owl for our pet. Dad did catch the owl and we cheered. Bodai came and scolded my Dad for studying too much white men's education. She mumbled certain things, and Dad released the owl.

Mum was pregnant with Joseph at that time, and Grandma said, bad things would happen if we kept the owl.

In New Zealand, owls is said to originate from the underworld, the Morepork (Ruru) is strongly associated with the spirit world in Maori mythology. For example, it is believed that if a Morepork sits conspicuously nearby or enters a house there will be a death in the family and in times gone by these strong beliefs led to some Taranaki Maori eating Morepork, believing that it would prolong their lives. http://www.wingspan.co.nz/maori_mythology_and_the_ruru_morepork.html

I wrote in my fiction Mail Order bride,  and Cry the Oppressed Women, I wrote about this, weaving the owl and death and funeral.
Posted by Ann, Chen Jie Xue 陈洁雪 at 3:02 PM