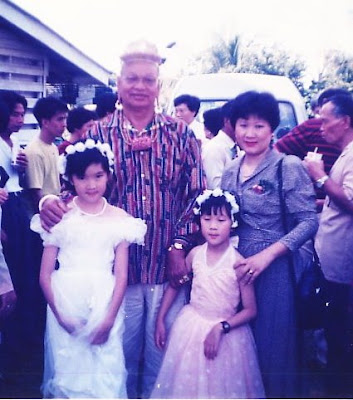 Here's Elley relative Raja Bala. I had to take a photo with this chieftain. The girls were Elley's flower girls. 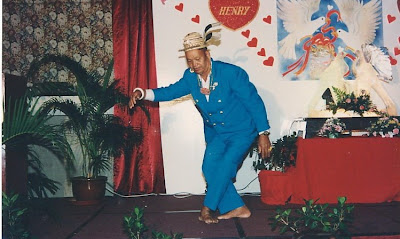 This is Elley's relative dancing at Elley's wedding. He had a traditional head gear and long pierced ears.

Our first encounter with the Kelabits from Bario Highlands was in the early 1970s. My Sister E  met and married Kallang Akup. If Kallang was a big man, wait till you meet Raja Bala.

My Brother Henry and Elley was getting married. The whole Chan went to Miri for the wedding. I met Raja Bala when I went to meet Elley Lina's people from the Bario Highlands in the 1990s. I was awed by his towering physique of 6ft 3, and yet his gentleness. I asked him if I could have a photo with him. You can tell his affection by the way he held my girls' hand.

I had left for New Zealand and Elley told me he was very sick and later died. This towering belian tree left a mark on my life. He was not just Elley's uncle, but the man who obliged my request for this photo.

Kallang's Father fought against the Japanese during the second world war. The late Akup received the Pacific medal and King George Medal.


Later the Kelabits used the parachutes to make into mosquito net. I could not breathe sleeping inside; I had to put my head outside when I first went to Bario for holidays.