A chicken story; gab and cecilia 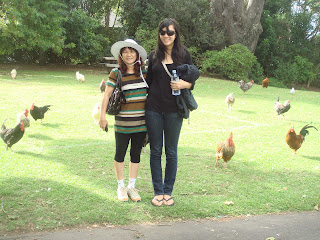 Now this is a real story, we have 2 lawyers to vouch for it. My Mum's STUD rooster was so handsome, my crazy little brother J used to hug it and called it his pet. It was really so handsome. Some 2 men came from afar, and offered my mum $500.

Mum was so pleased, this KAI KUNG  aka rooster  to get $500. He could easily be replaced by another stud.  But my little brother J hug his rooster and started crying and wouldn't let go of it. The two men went empty handed.
The next day, me, the chicken and duck feeder found the rooster, no longer pretty. " Ah Ma, Ah Ma, the rooster is dead."

U don't need to be a rocket  scientist, how a perfectly handsome rooster chasing all the hens one day could be dead the next day. My Ah Ma didn't know to be angry with my brother and scold him so we had to bye bye $500 which was very big then,in the 1960s or to be glad she didn't sell it because J would forever blame her for selling it for $500.

So my two brothers became lawyers to fight the bad guys and send them to jail.

My cousin from the Kong side and my daughter, we went to see chicken.