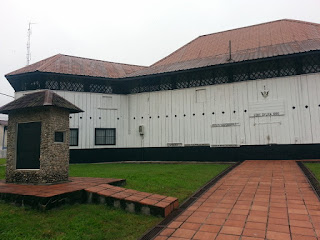 The Fort Sylvia (Malay: Kubu Sylvia) is a historical building located in Kapit town in the state of Sarawak, Malaysia. Built in 1880, it was renamed after Rani Sylvia Brooke, wife of Rajah Charles Vyner Brooke, in 1925. photo: David Lau.
https://en.wikipedia.org/wiki/Fort_Sylvia
https://en.wikipedia.org/wiki/Fort_Sylvia
Captain Roger Cheng Aka Captain Fong parachute down to Kapit with four other Canadian Chinese soldiers. It was into this situation that 29-year-old Roger Cheng and four other Chinese-Canadians, Jimmy Shiu, Norman Lowe, Roy Chan and Lewis King, were flown on August 6, 1945. Cheng was the first Chinese-Canadian to become an officer in the Royal Canadian Corps of Signals, a rare accomplishment in those days. He was an electrical engineering graduate from McGill University and spoke fluent Cantonese, making him a natural to head this team.

From Kapit he led the Allied soldiers to liberate the people from the Japanese Occupation. What is special to me is the Japanese Camp was ten minutes from my Grandpa's house. My grandpa and my dad were privileged to witness the surrender.

Roger Kee Cheng served as a member of the Royal Canadian Corps of Signals during the Second World War. He saw service in Ottawa prior to undertaking commando and guerrilla training for his subsequent service in the Molucca Islands and Borneo.

The federal department of Veterans Affairs Canada states that the date is of "remembrance for the men and women who have served, and continue to serve our country during times of war, conflict and peace"; specifically, the First and Second World Wars, the Korean War, and all conflicts since then in which members of the Canadian Armed Forces have participated.[14] The department runs a program called Canada Remembers with the mission of helping young and new Canadians, most of whom have never known war, "come to understand and appreciate what those who have served Canada in times of war, armed conflict and peace stand for and what they have sacrificed for their country."[15]