My friends Charlie Charoenwong and Chanika Charoenwong went to USA with their children.
Part of their journey reminded me of the time I went with my flatmates to Niagara Falls, New York, back the Detroit way. At one section of the road near to Buffalo, there was no vacancy all along the road.
We came to a motel to be told there were no vacancy, and there was a couple, A fifty something Asian woman and an American man. She offered to me to sleep in their room. May it it was instinct, I declined.
Forty years later, and a writer of few books, I thought back what a smart decision it was. Recently, I read an au pair taking a celeb to court. She sued the celeb for making her do a Three some with her husband. When I read this, I am glad I didn't put myself in that predicament.
Thanks Charlie for yr photos. I like this photo because my friends and I climbed all the way up the Statue of Liberty.

My sister Grace went to Lourdes and she said a prayer for me. This happened just when I released my latest book, Two Asian Stories. The book has content of Roman Catholicism, which my upbringing is influenced by. 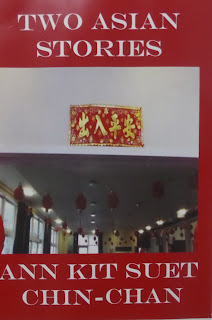 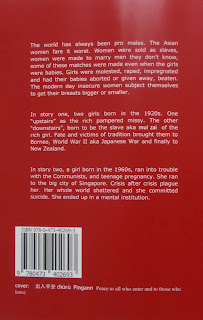 The world has always been pro males. The Asian women fare it worst. Women were sold as slaves, women were made to marry men they don’t know, some of these matches were made even when the girls were babies. Girls were molested, raped, impregnated and had their babies aborted or given away, beaten. The modern day insecure women subject themselves to get their breasts bigger or smaller.

In story one, two girls born in the 1920s. One “upstairs” as the rich pampered missy. The other “downstairs”, born to be the slave aka mui zai of the rich girl. Fate and victims of tradition brought them to Borneo, World War II aka Japanese War and finally to New Zealand.

In story two, a girl born in the 1960s, ran into trouble with the Communists, and teenage pregnancy. She ran to the big city of Singapore. Crisis after crisis plague her. Her whole world shattered and she committed suicide. She ended up in a mental institution.

My latest book, published 2017. When I was young, words like sex, rape, abuse would be considered X-rated.  Today, it is occurring every where. Perhaps I have gone where other writers will not touch on especially in Asia.