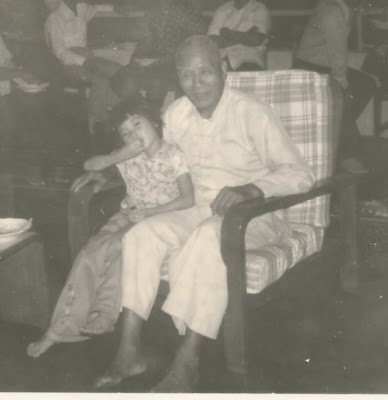 Grandfather aka Ah Kung with Grace. He was around 80 years old.

Grandfather wore traditional Chinese Clothes and canvas slip on shoes. The clothes were the high collar, and buttoned down the front with clothed buttons. His pants were humongous fisherman pants with no elasticize top, but held up with his leather belt. His under pant were blue boxer pants with no elastic; instead he folds it smartly that it would not drop no matter how one would tug it. He had a special wallet attached to his belt and kept out of sight to the right of his front torso. When we were growing up, he was the last of the people in Sibu dressed in his attire. We asked why he did not change like our Maternal Grandfather.
He said, “Nobody will rob an old poor China man.”
He was also very proud of Bruce Lee. Bruce was a Hong Kong actor and he wore the same Kung Fu clothing. Bruce to him was the epitome of a Chinese person. When he went to town,teenagers mistook him to be a kung fu master and pestered him to teach them. One day, he got tired of them, and pretended to take out his umbrella. The kids thought it was his martial arts step.
Posted by Ann, Chen Jie Xue 陈洁雪 at 3:12 AM