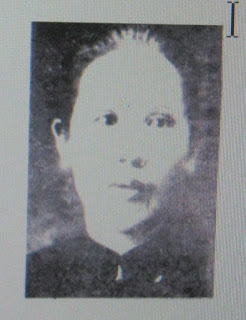 Grandma was born at a wrong place and wrong time as were most of the Chinese woman of her era.


In a paternalistic society, males was favoured over females, thus girls in poor families were sold for a pittance so that they would not starve. This poor girl became a mui zai and was to serve her mistress all her life.

Grandmother Chan  had mui zais all her life. Her parents were relatively well off. They gave her a mui Zai. There was talk that the British government in Malaya and Singapore was going to pass an emancipation of slaves, and those not releasing the slaves would be punished.
To preempt this, when this mui zai was 16, a marriageable age, Grandfather Kee Seng arranged for a suitable mate and married her off. This was much to the aghast of Grandmother. Grandmother whined that this mui zai was paid for by her parents; therefore she was her property. This mui zai was her slave for life.  Grandfather Chan had no right to sell her property. But Grandfather would not have any part of this old feudal slavery system. They married her off to someone up the Rejang River.
The emancipation law was never passed.
Posted by Ann, Chen Jie Xue 陈洁雪 at 8:05 PM