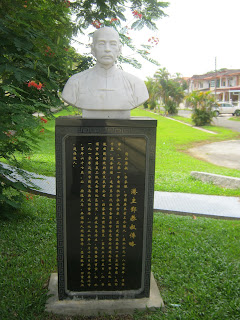 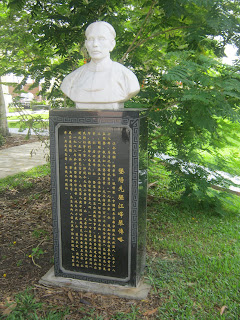 Photos taken at the Vui Ning Memorial Garden at Upper Lanang Road near where the Chans used to live and farm. There is a Then Kung Suk road. It was first built as a community project led by Grandfather Chan Kee Seng and Uncle Chan Hung Fei.

In 1902, from our family records, the Cantonese[1] came under the leadership of Then Kung Suk and his assistant Kong Yit Khim[2]. In this first group, there were 70 Cantonese and Hakkas or the Vui Ning group. They arrived in Sibu. As the Foochows and the Vui Ning groups were as spoke different dialects, there were conflicts. The Vui Ning group called the Foochow Lo (Foochows) and regarded them as arrogant because they had arrived a little earlier and had embraced a white man’s religion. The feuds went up to the White Administrators of Rajah Brooke. By a swift of a stroke of a pen, a demarcation was divided; the Cantonese were given land upriver from Lanang Road to Kanowit. These 20,000 acres was called Guang Dong Bar (Kwong Dong Settlement.) Between 1902 and 1917 six hundred and seventy six Vui Ning came to Sibu.
[1] The Cantonese Settlers
Not much written historical record was available about the Cantonese settlers in Sibu. What is known was that two Cantonese pioneers were Chiang Cho Shiong and Then Kung Suk. After signing a contract with Rajah Charles Brooke to bring in Cantonese settlers, Then Kung Suk returned to China and recruited prospective settlers from Guangning, Sanshui, Qingyuan, Sihui, Fanyi, Dongguan and Chonghua to open the Sibu Kwangtung Settlement at Lanang area. In 1904, Jiang Yiqing established a farm at Salim. Latter settlements were established at Sungai Stabau, Lower Naman, Sungai Naman, Upper Naman, Sungai Nibong, Durin, Sungai Pok Sungai Petai, Sungai Pak and Tanjung Lukut. By 1917, the Cantonese were settled as far up as Kanowit. Source: -Fong Hon Kah,
A history of the development of Rajang Basin in Sarawak and
- Kiu Mee Kuok
The Diffusion of Foochow Settlement
[2] Teng Kung Suk and Kong Yik Khim were among the Cantonese pioneers who brought the first batch of 676 settlers to Sibu in 1902.
Posted by Ann, Chen Jie Xue 陈洁雪 at 2:26 AM