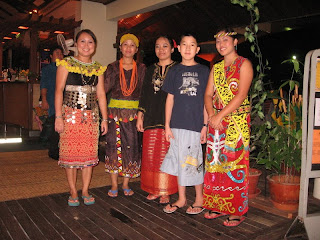 There are many racial groups in Sarawak, Ibans, Bidayu, Kelabit, Malays, Melanau, Belawan, kayans, Kenya, Belawan, and the nomadic Penans, and the Chinese.

Here is Sam greeted by the beautiful dancers at the Wildflower Restaurant in Mulu, where a buffet dinner and show was part of our package. The Wildflower Restaurant is home to their own, well known dance group, the "Seri Melinau Dance Group", performing traditional dances from the region every evening at 8:00pm. I lalughed when the natives danced the traditional Chinese lion dance.

The Chans and the Kongs boast of a rich heritage. In our family, runs the blood of Iban, Bidayu, Kelabit and Orange Ulu.

There is another custom which is not commonly known. It is the concept of Apai and Amei.

Grandfather Kong was smart in his own way, he befriended the Sea Dayaks and observed the culture of the Sea Dayaks. He was very proficient in their language and he spoke like one of them.
(I guess my little brother Henry who is an anthropologist had inherited a lot of genes from Grandfather Kong.  Henry was comfortable living in the jungles among various natives in Borneo.)
When Mother and her siblings were born, Grandfather Kong invited the Sea Dayak chieftains to be their adopted parents[1]. There was a big ceremony with much feasting and dining. These chieftains became Mother and her sibling’s Apai (Dad) and Amei (Mum). In so doing, the Sea Dayak chieftains and all those living in that particular longhouse pledged to treat Mother and her siblings as their own. Should any Sea Dayak from another long house come to attack the Kongs, their adopted longhouse would come and protect them. This is an interesting ceremony as we are unaware of other families doing the same.