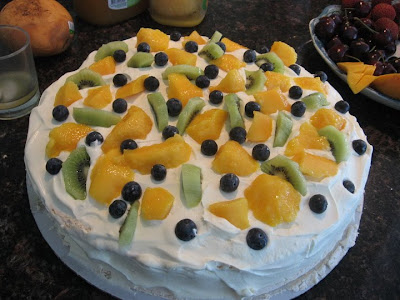 Pavlova is a meringue-based dessert named after the Russian ballet dancer Ánna Pávlova. Colloquially referred to as "pav", it is a cake similar to meringue . Both New Zealand and Australia claim that they first made the Pav to honor the dancer when she came to Down Under. This Pav is made by my New Zealand born Australia Sister in Law Karen.

On Sunday, I went to the 80th anniversary of the New Zealand Chinese Association. I looked around and saw some part-Chinese, part-European Children. I thought of my European Sister-in-law Karen and her 3 girls. Pavlova was on the menu. Karen's signature dessert was Pavlova.

Sadly in 2013, Karen grew wings and flew to heaven leaving behind her 3 surviving daughters, Katie, Sarah and Emily and her husband Charles and the whole clan of the Chans and Taylors.

Yesterday, her daughter Sarah post a photo of a dog which shared the same birthday with her Mum Karen.
Posted by Ann, Chen Jie Xue 陈洁雪 at 6:04 PM