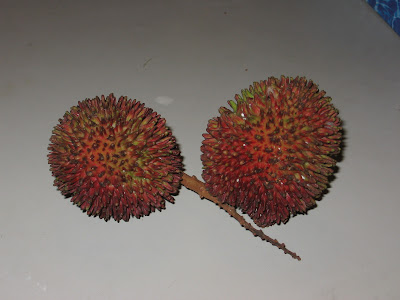 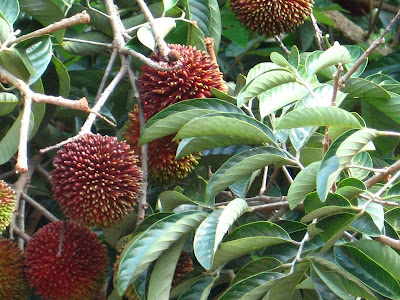 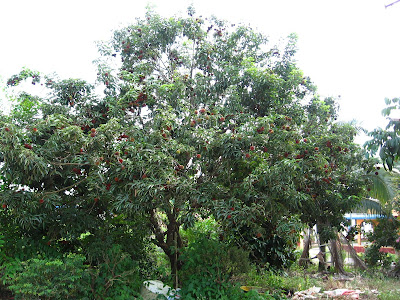 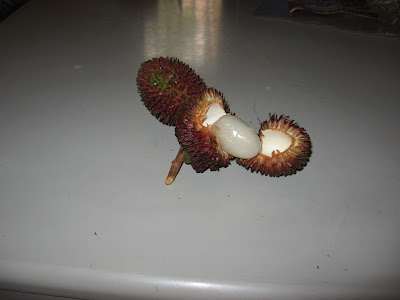 Common Name: Pulasan,Sibau fruit.
Botanical Name: Nephelium natubile
Specimens From: Malaysia
I was born in Sibu, in Sarawak on the island of Borneo.

My grandpa explained that Sibu was named after the local Sibau fruit. This fruit is similar to the hairy rambutan fruit that people cultivate. The Sibau fruit is a wild tree that grows in the jungle.

The natives pick them and sell them at the road side stalls. My grand dad did a lot of trade with the natives in upper Rejang river and we exchanged the Sibau fruits with Grand dad's grocery and other items like fish hooks and sinkers. It looks like an egg size hedge hog. The skin is thick and you open the fruit with a twist.

One day when I was living in Singapore, I saw the fruits in the market. I was full of nostalgia and bought some and shared my joy with my neighbours. They have never seen a fruit like this.

Ten years later, it has become a fashionable fruit tree. In West Malaysia, people were growing them in their back yard, and the markets in Singapore were selling a lot of them. Most people didn't however know what its name is. Of course, it is a grafted type, and the fruits are much bigger than the jungle ones.

In West Malaysia, they call it the Pulasan which in Malay means twist.

The grafted ones were sweet with a tangy taste but not as nice as the rambutan. When I saw them last July, I bought them for nostalgic reasons. They were also very difficult to twist to open. Full of sap, so I put my hand in a plastic bag, and used a knife to cut it open.

My West Malaysian friend teased me that my Sibu fruit was of inferior quality.