A baby swap? My sister Margaret 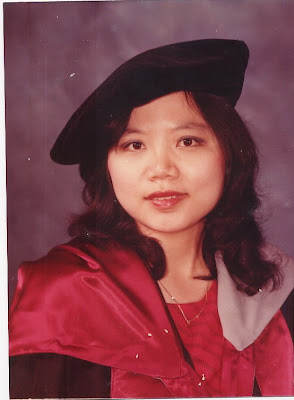 This was when Margaret was awarded with her PhD from the University of Christchurch. She did her studies in Lincoln College.

Mother’s been fretting and worrying. She has given birth to a child when her husband was away and the baby looked different from the rest of the brood. The nurse had brought a baby who was dark, and had big eyes. She was too different from the others. They all had fair skin, and smallish eyes, especially Ann, whose eyes were so small that they seemed perpetually closed. Call it maternal instincts; Mother wasn’t convinced that this baby was hers.

This caused Mother a lot of heart ache. Thinking that we had a baby swap.  You have to read the book to see what happened.

Margaret has been teaching at Universiti Teknologi MARA (UiTM) Sarawak.
On Sarawak Governor's birthday in 2010, on this occasion he gave honours to prominent people in the society. Margaret was awarded with a Pingat Bintang Kenyalang (Gold) on the occasion of the Governor's (TYT) birthday. This is the highest level for a government servant for that level. The next level is the Datuk category.