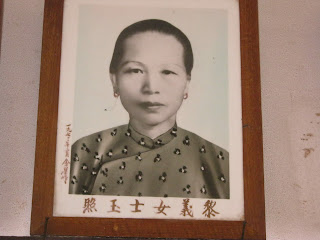 Grandmother Kong aka Lai Yii came from the Kwang Si province. Her father was a traveling Medicine man and she was a proud woman. In the past, a medicine man could cure simple ailments with his medicine. The people even called him Doctor or master. Grandmother Kong claimed her father was a doctor and hence a class higher than the other villagers. The women would answer back that he was just a drug peddler. She was less than ten years old when she came to Sarawak at the same time as Ah Tai and Grandfather Kong. Her parents made the match with Ah Tai to marry her to Grandfather.

Bodai was the only of my three grandmas I had interaction a lot. She did what most girls her generation did, cook, made cakes and sew. And I proudly claim that I am the only grand daughter of her who learned quilting from her. 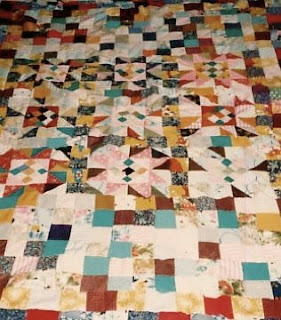 We didn't live with my maternal Grandma, she came to visit frequently and to help Mum when she gave birth to my younger siblings. She came to cook for Mum's confinement month, that is the whole month after a woman had her baby.

Grandma made one patchwork quilt for each of her three daughters. As a kid, my immediate younger sister Margaret and I had fun looking for her Chinese stars. Her stars were very unusual. It has 21 pieces of tiny squares and triangles cleverly stitched together. She didn't make many stars as it was very difficult to make.

In 1975, my nephew Wayne was born. Grandma came to visit. Sister Elizabeth requested her to make a patchwork for her first great grand son. Grandma was hesitant. Her heart wanted to make this, but her head told her that she was in her 80s, it would be impossible to make one as she was just visiting.

So we did, grandma and grand daughter pair. She did the cutting and supervision, and I went on my mum's old manual Singer machine.

But I went went ziz, ziz, ziz, ziz as I pedaled along. She admonished my 'fast hand, fast leg'. I committed myself to help her, I didn't have 6 months to help her. Times I made a mistake, she wanted me to unpick it.

We finished the quilt in a matter of days. I blackmailed Wayne, because he is the only great grand child that Grandma made a quilt for.

Despite the hectic time, I learn an invaluable skill. I could make a Chinese patchwork quilt. At that time, I vowed that I will never make another one, too old fashion. Now, I am glad, because I am probably the only grand daughter of hers who has inherited her skill.

Fast forward to 1990, I saw my good friend Owlyn Dickson's light blue quilt on her bed. It was so beautiful, I am reminded of my grandma's quilts. I came home, and made a quilt for D. I made nine Chinese stars, and the rest, I basically used squares. I made this queen size Chinese quilt in 3 days over the weekend. I didn't have much sleep. This time ziz, ziz, ziz, ziz on my electric Janome machine was reminiscent of the time with grandma.

The water engineer was a gem, he babysat D 5, and G 2. He took the girls shopping at Farmers for D to choose a backing for her quilt. She chose a lemon colour and I asked her why she didn't choose a pink.

The reason why I sewed frantically was I had to vacate my sewing room. Our friend J was coming to stay with us. He was our very good friend, and was an Engineering post graduate student with the water engineer at Auckland University.

D still has that quilt. I told her not to use it. It is unlikely that I will ever make another one. (Who knows, may be when I become a grandma, I may do it.) She wanted to frame it, I told her it was too big, not until she was successful in her career and has her own big house.

***This is the quilt I made for D, you have to look carefully for the stars. You will understand when my sister Margaret and I had fun looking for them.***
Posted by Ann, Chen Jie Xue 陈洁雪 at 1:19 AM