A Wedding, a Birthday and a Memorial 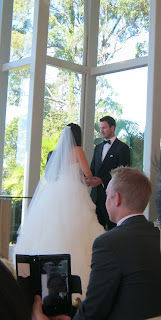 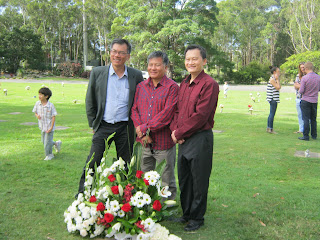 My three handsome brothers, the 3 Chan boys, from youngest to oldest, left to right. 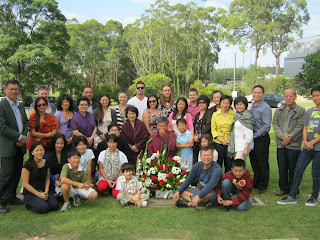 We had a joke about the in laws and outlaws. There are more than 20 who couldn't make it, including the Chins.

Charles, the birthday boy and Father of the bride, sang his appreciation to his eldest daughter Katie.

Every ten years, the Chans had a wedding and a birthday. This year, it was Katie's marriage to Mathew and Charles' birthday.

We went to Mother's grave in Southport.

Father broke the traditional Kwong Neng custom that married girls are not allowed to visit their deceased parents' grave. Father took me to visit Mother's grave in 1990 when I visited Australia from New Zealand. I couldn't attend her funeral because I was about to give birth to my second daughter.

Father promised me that he would let me go. It must have been a hard decision for him to make.

From there on, Father let us go to Mother's grave when the Chan girls went to Australia.

This time, Father had died, the Chan boys continued Father's new tradition. The group photo showed all the siblings and some of their families. We said a prayer, and remembered in our hearts what a wonderful woman Mother was.

I benefited most, it was Mother's hard work when Father went to England, she went back to the village and tapped rubber. She saved Father's salary and bought some land. That land was sold just when I was going to Canada. Father and I joked that I got my tertiary education on Mother's scholarship.

I shedded a tear because she died too soon, too soon before my children got to know their Bodai aka Grandma, and too soon to know I have become a writer. Perhaps she has been blessing me along. I love you Mum.