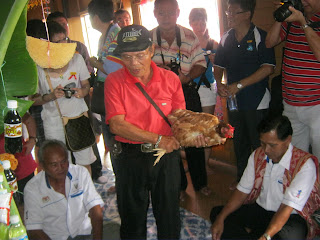 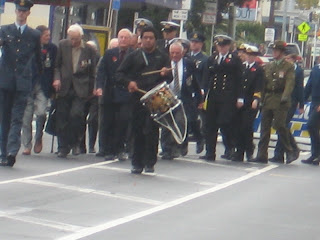 This is an old ANZAC day photo.

On this Anzac day, I am on a mission, to help some family look for their son who fought in the New Zealand Army in Malaysia. This is no ordinary person or New Zealander.

His name is Sibat.  His family in Sarawak wants to know if he is alive or if he is dead, where his body is laid to rest.

What a wonderful gift it would be if, they got news of his well being. I had gone to the RSA and Ministry of birth, Marriages and death. But without his Kiwi adopted name it is very hard to trace.

Gerinang Ak Sibat comes from Sarawak, in Borneo like me. He would look like some of the men here in this photo.

email: rizalbob@gmail.com or message me.


ANZAC Day, the Australian Vets are remembering their battle in Borneo. A battle that was not recognised until now.

The service is dedicated to all Australians and New Zealanders who died in various theatres of war, including in Malaysia, as well as in peacekeeping operations including the commandos who landed in Bario,” Kerr told the Borneo Post yesterday.
He said although there was no fallen World War II heroes here, there were many in Labuan and Ranau, Sabah.
Besides, it is timely that the service be held in Miri to commemorate the services of the eight commandos (six Australians, one New Zealander and a British) airdropped on Bario under the command of Major Tom Harrison to help locals fight the Japanese from behind the enemy line on March 25, 1945.
He said it was touching to see Australian Jack Tredrea, 93, the sole surviving member of that elite group who helped liberate Sarawak from the Japanese army through ‘Operation Semut’, visiting Bario recently.
“The Anzac Day dawn service in Miri will be a traditional service, with an introduction delivered myself, a commemorative address by Robert Young (director, Tenby International School) and the wreath laid by Lawrence Lai (Mayor of Miri),” he disclosed.
Among other activities are poem reading in remembrance for peace and for the future of New Zealand and Australia, ‘One Minute’s Silence’ (a sign of respect and a time of reflection on the significance of the ceremony) and flag raising ceremony.


Read more: http://www.theborneopost.com/2013/04/24/anzac-day-commemorative-service-in-miri-this-thursday/#ixzz2RRJCdbFf
The Secret war in the 60s in Sarawak was recognised only last year.

On Anzac day, I remember my parents and grand parents who lived during the World War 2.
Posted by Ann, Chen Jie Xue 陈洁雪 at 12:57 AM