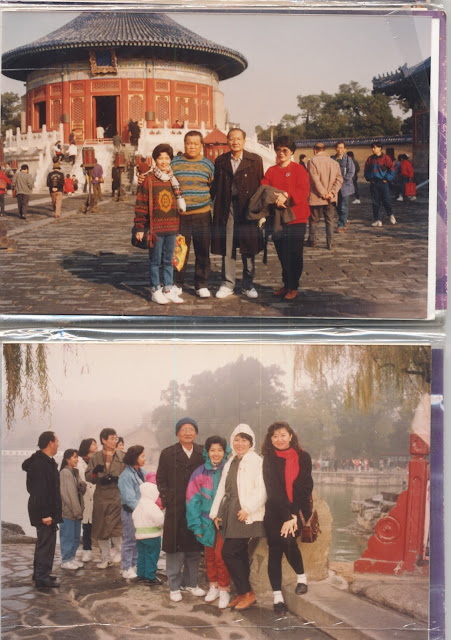 In November 1993, Father and Rose went to Beijing and Kwang Zhou with a group of friends. It was very cold in China. To an old man who lived in the tropics, it was bitterly cold. Fortunately he brought his long johns and borrowed Chen Onn’s trench coat. Rose said Father was caught in the rain while climbing the Great Wall of China, and he succumbed to a nasty cold.
In the old village home in Kwong Neng, his cold got worst. The draught was very bad in the old house, and there was no heater. There were no repairs since the communists confiscated the building. When Father went with our Oldest Uncle Ing Fei to visit his late mother’s (Grandmother Chan) tomb, the slope was wet and slippery. Father slipped and fell, and he admitted he was not young anymore. At the grave, he saw it was just a mould of earth without a tomb stone.
Uncle Ing Fei said, “We just used a stone to demarcate the tomb. We were too poor to make a tombstone.”
Father decided he would pay for the tombstone for his Mother. Uncle Ing Fei told him it was okay by him, but for Feng Shui purposes, Father had to consult with Uncle Mark since the Mother also belongs to him. Uncle Mark was happy to chip in to building the tombstone.
After it was built, there was a celebration among the relatives, as it was liken to a renovation of Grandmother Chan’s “house.” That trip was a good one for the brothers who had not seen each other for almost seventy years.  It was also the first since Father was 4 years old that he had been back to China.
He came back to my house in Singapore to recuperate. I took them to Sentosa. It was for family reasons he went to China. In Singapore, the warm climate helped him recover,
Posted by Ann, Chen Jie Xue 陈洁雪 at 10:01 PM