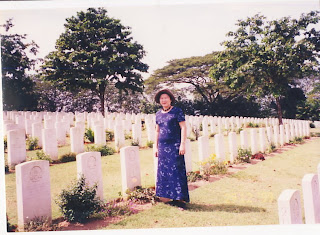 Father became a boarder at the Malayan Seminary ran by the Seven Day Adventist Church. It was the Youngberg Memorial Hospital[1]. The Seven Day Adventist is a vegetarian Institution. In the weekend, he went to Mou Ping’s shop and ate as though he had been starved. He gave his cousins tuition.

The boys in the boarding school found on the bottom of the desk, POWS from Australia and New Zealand had craved their names and addresses. They asked who ever found these addresses to please contact their family. The boys had some fun trying to contact these addresses, but many did not reply. Many were sad stories that their loved ones did not made it home.

Whenever he could, Father went to the Kranji Cemetery, perhaps to reflect on how life had been changed forever. Perhaps he went with a gratitude to those young men buried there.

There are a lot of bereaved parents who probably never went to Singapore and see this sight.

Before 1939 the Kranji area was a military camp and at the time of the Japanese invasion of Malaya, it was the site of a large ammunition magazine. On 8 February 1942, the Japanese crossed the Johore Straits in strength, landing at the mouth of the Kranji River within two miles of the place where the war cemetery now stands. On the evening of 9 February, they launched an attack between the river and the causeway. During the next few days, fierce fighting ensued, in many cases hand to hand, until their greatly superior numbers and air strength necessitated a withdrawal. After the fall of the island, the Japanese established a prisoner of war camp at Kranji and eventually a hospital was organised nearby at Woodlands. After the reoccupation of Singapore, the small cemetery started by the prisoners at Kranji was developed into a permanent war cemetery by the Army Graves Service.
There are now 4,458 Commonwealth casualties of the Second World War buried or commemorated at Kranji War Cemetery. More than 850 of the burials are unidentified. The Chinese Memorial in Plot 44 marks a collective grave for 69 Chinese servicemen, all members of the Commonwealth forces, who were killed by the Japanese during the occupation in February 1942. Within Kranji War Cemetery stands the Singapore Memorial, bearing the names of over 24,000 casualties of the Commonwealth land and air forces who have no known grave. The land forces commemorated by the memorial died during the campaigns in Malaya and Indonesia or in subsequent captivity, many of them during the construction of the Burma-Thailand railway, or at sea while being transported into imprisonment elsewhere. The memorial also commemorates airmen who died during operations over the whole of southern and eastern Asia and the surrounding seas and oceans. The Singapore (Unmaintainable Graves) Memorial, which stands at the western end of the Singapore Memorial, commemorates more than 250 casualties who died in campaigns in Singapore and Malaya. Many of the graves carry no name just an inscription to 'A Soldier'
http://www.myfareast.org/SingaporeMemorials/kranji.htmls

[1] It is still in Singapore at Upper Serangoon Road.