Mum and her daughters and their cake making. 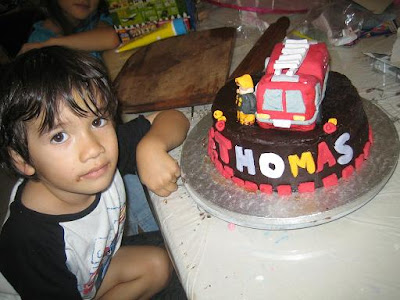 Mum made a lot of cakes, she was was famous for her iced cakes. Her daughters too made beauutiful cakes, especially Grace. This is by Helen.

Without the icing, cakes will just be cakes, plain cakes.

I have two stories, one was from long ago. Mum had twins, a boy and a girl. For their birthday, mum made two cakes, and she used a thin layer of water icing before she put on the royal icing. Because we were in the tropics, the icing sweated.

Mum's idea was to dry them in the sun.

Can't remember which of us older kids was told to keep an eye, that wasn't important.

Next thing, when Mum went to check. The kid on duty was no where to be found.  Dog had bitten a big hole at the side of Boy Twin's cake.

Mum was angry with Dog, and the child who was on duty.

We told her, just use one cake for both. But mum won't hear of it.

On the birthday, she produced two beautiful cakes. She quietly told the Older Child when she was cutting to serve the cake to make sure not to cut the section where she had "cemented" with a big lump of royal icing. Mum is really smart.

I have another story.

My friends had twin dogs, we were having a pot luck dinner. She bought an apple cake and left on the table. Her Twin Dogs had eaten the to part of it.

They bought another, and don't know why, the baker had spread icing on it. ( Not usually done.)
Friends joked," Are you sure you didn't ice the dog eaten cake?"

I told them my mum's dog eaten cake. LOL