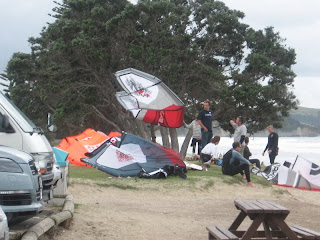 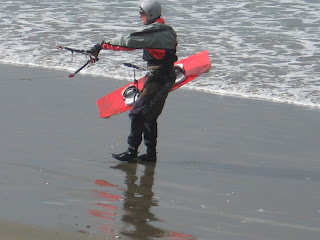 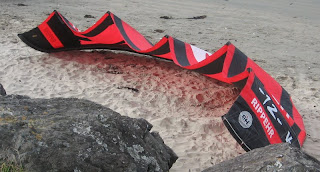 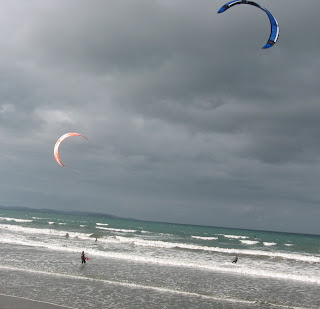 New Zealand is a great place for out door sports.  I was north of Auckland at Orewa, known for retirement homes and beautiful surfs. I don't know if the retirees are involved such extreme sports of wind, waves and surfs.
In the very cold breeze, I quickly went out to take my photos and then recluse myself in the car challenging my brain a mathematical game of Sudoku while the water engineer when to investigate his beach with another friend. You will like my photos of a new sports. Kiteboarding. I admire these sportsmen and women in their wetsuits oblivious to the cold. I thought of Jean batten when I saw the surfer. I guess if Jean is alive today, she too would be at the Orewa beach.
Kiteboarding, a synergy of wind and water forces, takes harnessing the wind to the extreme! Kiteboarding is the ultimate fusion of kiteflying(power kites), wakeboarding, and snowboarding. This fascinating combination realizes mans eternal dream of flying. Once you experience the rush of kiteboarding, you will never be the same! Kiteboarding is the hottest new kite sport to sweep the world and it thrives on pure adrenaline! 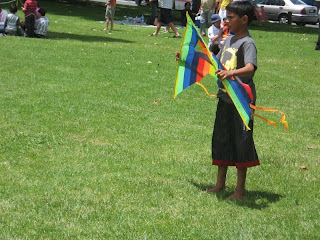 This photo takes me back to when I was a kid in Borneo.

Kite flying was a serious business to the boys like my brother Charles and Joseph. They made their own kites, spending ages shaving bamboo rods to make the skeleton of the kites, slowly shaving a little and checking to make sure the sides balance.

Then with home made glue, they glue the coloured wax paper on the frame.

For serious competition, they melt some smelly horse glue and mix it with pounded fine glass powder and attached them to the string. This is real serious as in the process of doing this, they cut themselves.

When the strings are dried, they fly their kites and war begins when they cut the string of each other's kite. They shout "BALAYANG" when a kite is cut off, and the scramble for the fallen kite begins.

In low rise houses, the boys even climb up people's roofs, trees or over fence. They trample on vegetable patches, topple over flower pots. They just want that prize kite. Totally oblivious to anything else. A complete disregard for people's property.

My part in this vicious fight, I was the kite flyer's aide. Like the boy in the photo, I help to lift the kite up before the kite is launched.

Thursday Challenge is a place for photographic fun and learning.

http://www.spunwithtears.com/thursday.html
Posted by Ann, Chen Jie Xue 陈洁雪 at 12:28 AM