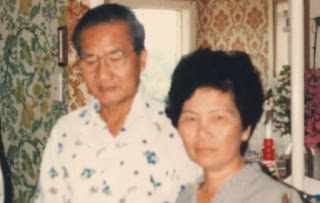 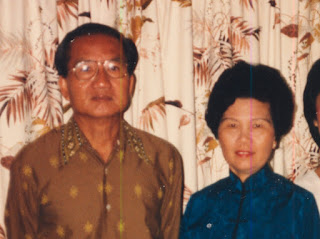 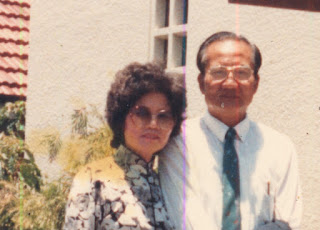 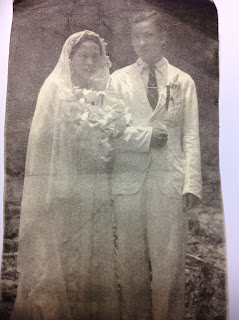 Handsome couple Mr. and Mrs. Chew Chiong Tack. Mr Chew Kindly let me use this photo. Mrs. Chew made the dress. What a beautiful dress it is. My mum would have been a beautiful bride. I love the bouquet,

I was pleasantly surprised to receive this email. It's from the

Chiong Tack. He had a shop near the wharf. Father was the

Secretary of the Old Boy's Association, and Chiong Tack

was the treasurer. I was indirectly involved because I help

father to collate the annual report. We remember the DA

POW from the association dinners. ( That resulted in my first

published article in the Dolphin magazine).

I will copy Dr John Chew's first email, and his brother Paul

Chew's comment to my blog post.I am sure they do not

mind. Both my parents are dead, and finding Mr Chew

Dear Ann,
We have not met but our parents were good friends.
My brother was googling my father's name and came

across Sarawakiana blog and your posting about my

now and they remembered both your parents well. My Dad

said your father and him were very good friends,and

being in the Old Boys committee together for many

years before your Dad was transferred to Sarikei. . He

talked about their two heads clashing and my father

ended up worse off with a black eye.My Mum remembered

the unfortunate accident involving your Mum.
This is a picture of their wedding 12th September 1942.They are in Kuching now with us, and lately have not

been of their best health.
My brother Paul tried to reply on your blog but I

I  got to your blog through Sarakiana's blog after googling

my father's name. My father is Chew Chiong Tack. Yes, he

was your father's good friend. He even remembered your

father's black eye from football injury. My parents are now

staying with us in Kuching. They are both 90 and have fond

memories of the good old days.

My parents were married during the World War 2, (Japanese

War), they didn't take a wedding photo. Sometime after mum

Mother wore Aunty Kok Fei's wedding dress because I have

see Aunty's dress and her wedding photos. Dad said he

asked why his friend's wife and not Aunty Kok Fei's. I am

curious, and now I have the opportunity to find out. Uncle

Kok Fei was sort of Father's best man when they paddled

the canoe up Rejang River to Durin and fetch Mother down

The Japanese came, at fifteen, Mother gave up her dreams of studying in the big city and became a candidate for a child bride match making session. Ah Tai promised her that she would choose a young man of fine character, educated and from a good family. Ah Tai went out to reconnoiter with her cousin Lai Siong who was a match maker. She must have loved her granddaughter so much to travel during the perilous war time in a little canoe. Together they scoured fifty miles of both sides of Rejang River, and the whole of Sibu town. Word came that five miles upriver was that fine young man who fitted the bill. He was unfortunately not a Hakka but a Kwong Ning boy and a Chan.
Traditionally the Hakka Kongs married only the Hakka

only the Cantonese Lees, and vice versa. But then beggars cannot be choosers.

Was Father a willing partner? Father had to be practical and

quickly find a wife. For him, it was the fear of forcefully
conscripted to the Japanese army.

photo.
Answers to your queries:
1. My grandfather owned a shop selling clothing

material besides practicing as a Chinese Physician.

During the Japanese Occupation cloth was in very

short supply and there was a rush to get married amid

rumours of conscription and comfort ladies. The

wedding gown was made by "tukang"
.My Mum made the head band and bouquet out of paper

flowers herself. Many brides did not wear wedding gown

because of the rush and of the short supply! My Dad

said many weddings were celebrated by as much as

letting off the firecracker and nothing else! Mum said

other brides!
2. The name Rose probably came the Catechism teacher

so there were many Marys and Roses.