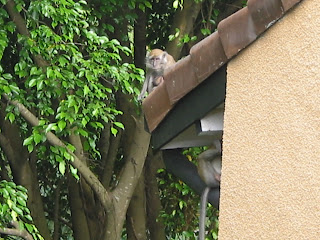 Our new house at Embang Road was half surrounded by discarded rubber garden which had turned into a semi jungle. We caught many monitor lizards, squirrels and even a pangolin.

Grandfather Chan really wanted that Monkey. He was afraid of snakes and won't eat the monitor lizards, though he kindly prepared and cooked them for us.

One day, a man came to the jungle and started shooting at the monkey. It went further and further into the jungle.  Mother said he was so stupid. His gun shots could be misconstrued as communists were there and the soldiers would come and arrest us. ( Remember, that was the time when we just had the 24 hour curfew.)
Posted by Ann, Chen Jie Xue 陈洁雪 at 2:37 AM