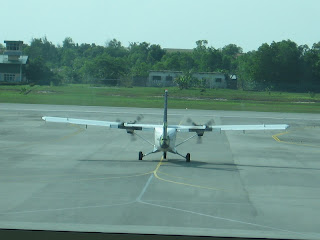 In 1969, Elizabeth went to Mukah to teach. She flew in a small seven-seater plane.
Mother cried, “She said, the plane is so small, is it safe?”
Grace kit Mui had shortly been born. One day, Mother sat in the room once shared by Elizabeth and me and now my room. I did not pay attention to what she was doing.
It rained. In Sarawak, when it rained, it did not just rain, it poured. We all rushed downstairs to take in the laundry. In those days, there were no disposable diapers. We used cloth nappies.
When we got back, Mother was in tears. She showed me the letter she was writing to Elizabeth. She had written almost three quarter of an A4 page long. We had forgotten to shut the window. The rain came in and smudged the words. She had written with a fountain pen. The words were illegible. What a waste! I consoled her, you can write again. She said she had no more mood or motivation to write again.
The war stopped Mother's education. It wasn't easy for Mother to write. She tried very hard.
Elizabeth married Kallang from Bario Highland in 1974. To get to Bario, you also have to fly in a small plane.