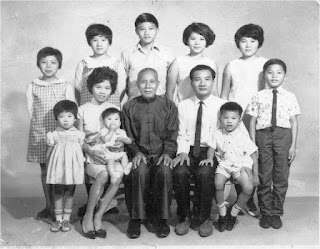 Here's a photo taken in 1970. My Ah Kung was about 80. Mum and Dad were war bride and groom. They were forced to marry because of the Japanese soldiers.  Mum at 15, her parents forced her to marry so she wouldn't be forcefully taken away by the Japanese as a sex slave, and Dad, 20 so he wouldn't be conscripted to the Japanese War. Dad was already forced into civilian Japanese worker.
Cheers,
Ann
Posted by Ann, Chen Jie Xue 陈洁雪 at 9:54 PM