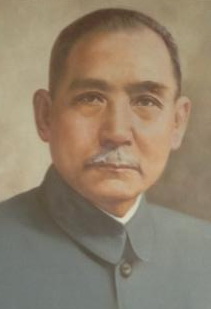 He was revered by Grandpa Kee Seng and we were taught to revere him as the Father of Modern China. Grandfather told us girls that we had Dr Sun Yat-sen to be able to walk around without  suffering the pain of binding our feet. He freed the girls and banned food binding. Before that girls at 3 had their feet broken and bound so they have their "gold Lotuses" and men like their 3 inch feet.

The more I write about my ancestry, the deeper I get into my roots and discover that I have Chinese blood flowing in me. I appreciate Chinese music and listening and watching Chinese news.

Here is Jackie Chan singing he loves his country. It is a beautiful song.

Top photo: Lilian on the right.

Lilain first on the left.
My ESOL student Lilian Cai student in Sun Yat-sen university  and worked for 14 years as a nurse in China. She worked as internal medicine and endocrinologist nurse. This photo was taken with her teachers. Lilian came from Guangzhou.China and now lives in Auckland New Zealand.

2010 with colleagues from the Department of Endocrinology photo — at The first a ffilliated hospital sun yat-sen university. Lilian at the first row, on the far left.

Sun Yat-sen (12 November 1866 – 12 March 1925)[1][2] was a Chinese revolutionary, first president and founding father of the Republic of China ("Nationalist China"). As the foremost pioneer of Republic of China, Sun is referred to as the "Father of the Nation" in theRepublic of China (ROC), and the "forerunner of democratic revolution" in the People's Republic of China. Sun played an instrumental role in the overthrow of the Qing dynasty during the Double Ten Revolution. Although he was in St. Louis, Missouri at the time,[3] he was appointed to serve as president of the Provisional Republic of China, when it was founded in 1912. He later co-founded theKuomintang (KMT), serving as its first leader.[4] Sun was a uniting figure in post-Imperial China, and remains unique among 20th-century Chinese politicians for being widely revered amongst the people from both sides of the Taiwan Strait.