Stealing from a grieving person in a cemetry, that is a S**** person. For the Chinese, you may steal from a life person, but never ever steal from the dead.

Soon it will be Ching Ming/Qing Ming   (清明节) visiting the graves festival. Idiots like this may be prowling.

Many Chinese like my uncle and my friend fly across the ocean to do remember and honour their ancestors at grave sites. They bring food, wine, red cancles and paper money.  For the Chans, we are Christians, we bring white candles and flowers. 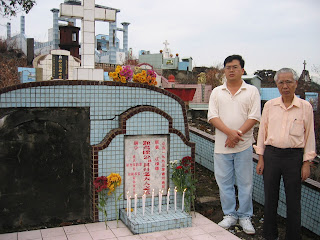 Here is Uncle Mark with his youngest son Luke at my grandfather Kee Seng's grave. The other side is vacant , made ready for my Step Grandmother Wong Sam Yin. The grave is at Sungei Aup, the Cantonese cemetery. Every year, Uncle Mark, Luke and my brother Henry would go from Kuching to sweep the tomb. As Uncle Mark, and late Grand were Roman Catholics, they bring flowers and white candles. 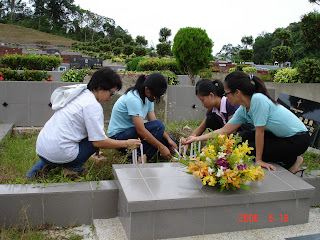 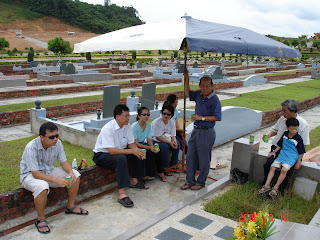 This was not Qing Ming day, it was the day Father's tombstone was assembled. Rose led the family in Kuching. The rest of the family were abroad and could not attend. Henry said the words were slanting. It had to be done again. 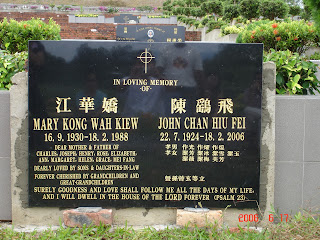 
Photo / File photo
Police are disgusted after a handbag was stolen from a woman's car while she tended a grave site.
The Christchurch pensioner was tending her parents' grave at Dunedin's Andersons Bay Cemetery on Saturday at 3.50pm when the alleged theft occurred.
The victim was just a metre away from her vehicle when the male is believed to have crawled between gravesites to access an unlocked car door.
He then grabbed her handbag - containing purse, credit cards and cash - before slamming the car door and running off.
Constable John Gilbert said the theft was "one of the lowest acts" he had attended in his decade-long police career.
The victim was visibly upset about the incident, he said.
"She already felt sad visiting her parents' grave, but then this happens. This is about as low as you can go."
Const Gilbert said the woman did not get a look at the thief, but was helped at the scene by two men.
Police believed the person lived locally and inquiries were continuing.
However, he urged the person to deliver the handbag to police, "or let us know where we can pick it up - no questions asked".
"If he wants the cash, that's fine, we just want her property returned."
The incident also served as a reminder for people to secure their vehicles and stay vigilant, even in cemeteries.
- Otago Daily Times
Posted by Ann, Chen Jie Xue 陈洁雪 at 4:53 PM